Asher Wolfstein is on Social Media: AsherWolfstein
Offline 1,339
My husband is now a citizen of the United States of America. It was a journey of twenty one years. We used to worry that it might never happen because enough people couldn’t find it in their hearts to try to have laws that apply to everyone equally no matter who they are instead of only certain groups. I would tell my husband in those times that this was a matter of attrition, that we just need to wait and try our best. That the hateful and ignorant voices may be loud today, but only because they are afraid of losing power. As time marches on, they become irrelevant and the truth about what’s right will always win, reality is always the final arbiter. Today we outlasted our opponents, we outlasted their fear, their hate, their tirades, and their sneers, and today we won. #pride #citizenship #immigration #gay #queer
The original syllabary of my conlang Chraki in the original creative journal as featured on the Chraki encyclopedia at chraki.dev This #conlang has some interesting properties including its dual purpose as a natural language and programming language. #chraki
Here I am, wondering about you. You being straight with me?
Since people seem to think putting things in hanzi/kanji makes things somehow more profound, I’m putting 個人主義, which is a Japanese jukugo word meaning #individualism out there into the universe. #individuality #japanese #justice
Happy holidays from my world to yours. #merrychristmas #happyholidays #happyhanukkah
Mays said the toilet was smoking... #smokingtoilet
This is my 15th anniversary with my beloved Maus. We met on this very day 15 years ago in a Westminster mall, me in my dog pants and tail. I went back to his apartment and played a Bach invention on his keyboard. After that, I showed him how my tail was attached and he knew then I was the one. Took me a little longer to figure it out, but here we are. And this is what we do. #happyhalloween #happyanniversary #15thanniversary #furry
I had such an incredible time at PAX West in #seattle visiting a dear long time friend, meeting wonderful new people and group, and of course, to plug, helping the Coles of Quest for Glory fame showcase their game Hero-U and upcoming title Summer Daze. Such an intense trip but oh so worth it!
Nothing bereaves you more quickly of more value than treating the material as you would the spiritual, and the spiritual as you would the material. Things aren’t people, and people aren’t things.
I gots myself some awesome #commodore64 games down in Loveland today to play on my beautiful #c64 Gotta #study some good ol’ #gameprogramming and #oldschool #gamedesign
Dun dun dun da da, dududun da dun...
Back to Top
Home  /  Lucifurryanism   /  Lucifurryanism

Some people grow up thinking that the tribalistic and vicious behavior once indulged in as unsupervised children should be upheld. That it should be applauded as moral. It goes by many names such as “tradition,” “the status quo,” “society,” or “the greater good.” The cycle repeats as many children are encouraged to engage in the same to create “robust,” acceptably broken individuals. They are profoundly resilient in explaining this establishment’s rationalizations.

This organization’s literal peons dare to turn their backs to tribalism, favors, corruption, and degradation to proclaim, “I turned out perfectly fine, and in fact, more moral than you.” Are they unaware of their cog-like existence in an immoral social machine meant to crush, oppress, and exploit? Or is that why they engage in ever incredible performances of delight in the self-deluded pretense of their elevated and mystical position?

This abstract society banks entirely on the seemingly obligatory disillusionment of adulthood to cushion its betrayal. They know that it is really a resigned abandonment of all principle. It always shows. Somehow it rears its ugly head in the quietest of places, only to be drowned out by the noise.

You Can’t Have It Both Ways.

You can’t champion individualism and freedom while simultaneously enslaving others to your will. You can’t deprive them of their choices or the disposal of the fruits of their labor as they see fit.

You are in staunch opposition to freedom and value of the individual when you demand things from others simply because you exist, when you force others to specific action to benefit you and your friends, and when you ask others with guns to impose your baseless decisions, to do your hard work of argument for you. You can’t stand against oppression if you are an oppressor. You can’t fight the mob with the rule of the mob. You can’t say might isn’t right when your might makes it right.

To those I’ve described, your righteousness is an illusion. It’s a cage in which you imprison yourself. You don’t have to contradict yourself at every turn. Let that shit go.

You Do Not Know How To Run The World.

You, nor anyone else, “lets” people do what they want. You don’t know what’s best for others. You are not smarter than everyone else. You are not intellectually superior to your fellow man if you believe that enslaving them, or placating them, is the answer to anything.

You don’t hold the singular truth, whether it comes from your microscope or commandments on tablets, as you are not omniscient. You do not really have a say in how other people conduct their lives; it’s all a facade. You probably don’t believe a word of this because of it.

You Can’t Save The World.

You don’t know how. Reality and life don’t need a savior, which isn’t you anyway. The presupposition that it needs saving is erroneous. It is not your place to fix other people’s lives without their consent, to figure out who needs to be taken from and who needs given to, to sort it all out, so it works “better.” That committee doesn’t actually exist in any ideal form, and all manifestations are simply harbingers of suffering and enslavement.

These are all illusions among us. Let that shit go.

Too often, the horticulture of individuals sees so many bountiful branches pruned to fit the frame of propriety in others’ eyes. These botanists decry the garden’s poor state and prepare ever larger shears for the reshaping, never knowing the incredible shapes that would’ve been. The plants themselves wither, twisting themselves into knots in response. It’s time that this landscape was seen as the impenetrable forest it is, rather than the populist’s storehouse. It’s time to relinquish the natural wyrd of the human spirit to its possessors.

It’s time that those who have suffered at the hands of these illusions, whose souls have despaired in doubt at the veracity of their natural wills, to say no more to being forced for their own good to participate.

Reality is the final arbiter. There is yet to exist a logical argument for why you, being equal, should be able to force me to do what you want in any part of my life’s demesne. In this, there is no logical argument for slavery, no matter how civilized. No person holds the sanction to another’s life. No bank exists to fulfill this blank check. No unadulterated will, through existing, makes a security deposit in some grand scheme.

In turn, there is yet to exist an argument for why I, being equal, should be able to force you to do what I want. I have no place to trespass, molest, or prune your values, nor take your fruits. It goes both ways.

This freedom allows us to seek our own answers, fulfill our own self-given redemption, and manifest our true will. All of us must face the questions, answering them ourselves without forgery. When we find our clarion call, it is up to us alone to execute our own volition. What we will.

For me, it’s simple.

No telling you what you want to hear.

No faking my value for you.

No feigning politeness or niceties if you’re awful.

Understanding, listening, valuing are here, but I don’t live for other’s benefit. I never have. You are looking through the wrong end of the binoculars if that makes me small.

My value doesn’t depend on you or your acceptance.

Virtue to the virtuous, love to the striving, the open, the understanding, the gentle—Oblivion to the sacrificial slaughterers.

My strength lies in character, not identity. I do not belong to a planet, a nation, a government, a group, nor a society. They do not bestow upon me the parameters of my existence by sycophantic pleas. I am not one thing except myself.

Neither are you if you’re willing.

I’m just as much human as I am wunk, and of the variety that likes coffee. This is just a neat and friendly way of showing love by helping fund my coffee habit (and/or other aspirations). Thanks in advance! 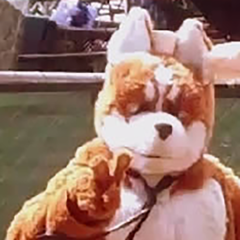 I am a male anthropomorphic hybrid between a wolf and a skunk (a wunk for short). Once, I traveled through time, but I am now stranded in the 21st century until further notice. I make it work though, my last employment was in promotions as a professional furry. Now I work every day on myself and my own projects. I write, craft, costume, read, code, invent, create, make, draw, and gradually becoming everything I need to be. In my travels, I’ve learned my greatest necessity is being true to myself. Beyond that, I don’t have any plans, just coffee, and strangeness.